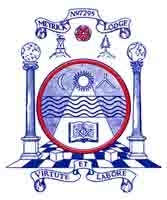 When W.Bro. Stephen May (who subsequently became the first Secretary of Meyrick Lodge) was installed into the chair of Octa Lodge No. 4397 in April 1950 one of his first problems was to deal with a waiting list of potential members which at that time had been closed for three years.  Not only was there this list but it was accompanied with some long standing uncompleted conferments on members previously received into the Craft.  He conferred with his Past Masters and committee as to what measures might be taken both to lessen the waiting time of those who had yet to be received and others who had to exercise patience between degrees that had to be done.  There seemed no alternative than to allow time to remedy the situation.  This somewhat unusual problem arose as an aftermath of the Second World War when men miss the companionship of colleagues formed on battlefields, and that great spirit of interdependence without which men and nations would not survive.  For the time being, any attempt to improve the situation had to be set aside but it left with him a determination to encourage Octa Lodge to make its contribution to the situation known to prevail throughout the constitution of the United Grand Lodge of England.  Subsequently a proposition was put to the Committee of Octa Lodge that it should sponsor a new Lodge.  15 Potential Founders were soon forthcoming and after a meeting with the Provincial Grand Secretary of the Provincial Grand Lodge of Hampshire and Isle of Wight a steering committee was formed.  Many meetings were held to formulate the way forward and to lay down guidelines for the future.  The first thing to be agreed was the name.  The first suggestion was Bournemouth, the intention being to depart from the Saxon names of the earlier Lodges but in view of naming a more recent ‘Bourne’ Lodge other suggestions were invited, the probables being, Westover, Sandbourne and Meyrick.  After preliminaries Meyrick was unanimously agreed.  The colours of the Lodge were expressly designed in Red, White and Blue to commemorate the coronation of Her Majesty Queen Elizabeth II.  The petition to form a new Lodge was sent to Octa Lodge to be approved and duly signed by the Master and Wardens in open Lodge; it was sent to Provincial Grand Lodge for official consideration of its recommendation.  In due time the petition was approved and given the number 7295 on the Register of The Grand Lodge of England.  The Provincial Grand Master of Hampshire and Isle of Wight,  R.W.Bro. W. G. Attenborough, consecrated the Lodge on 5th October 1953 at The Town Hall, Bournemouth.  Afterwards 175 attended a Banquet at the Pavilion Restaurant.  At the consecration the first Master, W.Bro. Gordon Jackson, presented to the Lodge the twenty-sixth replica of The Bible presented to Her Majesty Queen Elizabeth II at her Coronation and is still in use to this day.

In 1973 W.Bro. Stephen May produced his booklet ‘Meyrick Lodge 7295 1953 – 1973’ and in 2003 W.Bro. Sidney Barber produced the second instalment of the history of ‘Meyrick Lodge 1973 – 2003’ (compiled on a ‘warts and all’ basis) to celebrate the Golden Jubilee of the founding of the Lodge.  Copies of both can be seen at the Bournemouth Masonic Museum and Library at Knole Road, Bournemouth.  Copies of the latter can be obtained from the Secretary.

The Principles and Practices Particular to Meyrick Lodge No. 7295 laid down by the Founders have been maintained by successive Masters.  It was the pious hope of the Founders that they would go down to posterity.